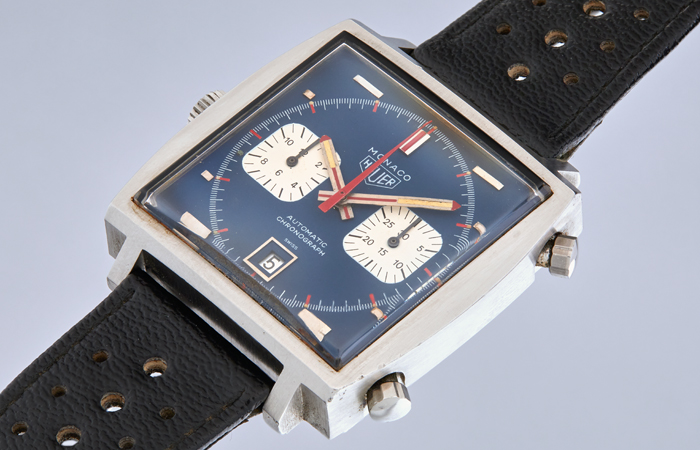 Once again, the combination of an iconic vintage steel sports 1960-70s chronograph, a legendary movie star and motorsports has proved to be a winner. On Saturday 12 December, Phillips in Association with Bacs & Russo, at its New York ‘RACING PULSE’ auction, sold a Heuer Monaco, reference 1133, for a world record price of US $2,208,000 (£1,635,000), including premium.

This was, however, a special Heuer Monaco, being one of the Monacos worn by Steve McQueen during the filming of the 1971 film Le Mans, in which he played the role of racer Michael Delaney. The watch was worn by McQueen as he drove the film’s famed Porsche 917. McQueen gave the Monaco to his chief mechanic, Haig Alltounian, on the final day of filming as a gift. Consigned directly by Haig Alltounian, the watch’s case back is engraved ‘TO HAIG Le MANS 1970′ as a dedication to the recipient. During his career, Alltounian worked with motorsports greats such as Bruce McLaren, Carroll Shelby, Dan Gurney, Derek Bell and Jo Siffert.

The watch itself is a Monaco reference 1133, circa 1969, with an automatic cal. 11 movement. It features the classic blue Monaco dial and square stainless-steel case on a leather perforated strap. The watch is accompanied with a period Heuer inner and outer presentation boxes and a hand-signed letter from Haig Alltounian attesting to its authenticity.

It was fascinating to view the auction live online and to see the bidding move upwards for this wristwatch. However, it was not the highest valued watch sold at the auction. This distinction went to a Rolex Cosmograph Daytona (‘Big Red’) reference no. 6263, circa 1981, with a manual cal. 727 movement. Once owned by Paul Newman, the wristwatch sold for US $5,475,000 including premium. 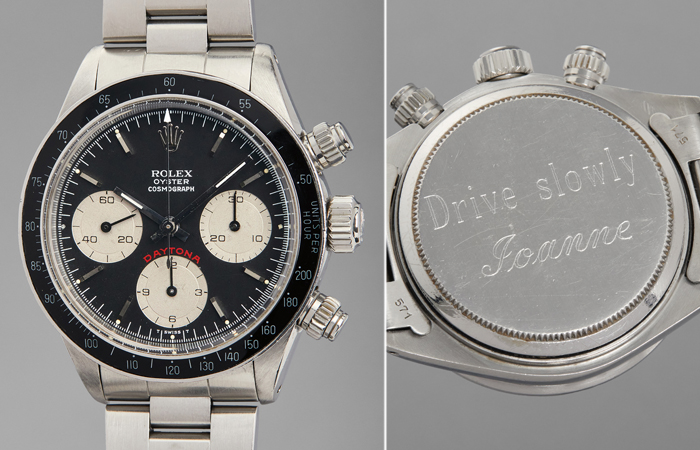 Originally purchased for Paul Newman by his wife Joanne Woodward in 1983 and engraved ‘Drive slowly Joanne’ on the case back. Newman gave the watch to his daughter, Clea Newman Soderlund, in 2008. A portion of the proceeds will go to the SeriousFun Network and Safe Water Network charities founded by Paul Newman.