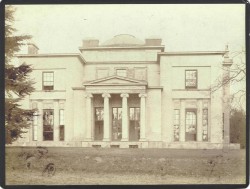 A banker, a brewer and a butler

We know very little about the early history of Upton Hall. Available records show that in 1335 Robert Bagenham had a home here. It stood on land that King Edwy had donated to Archbishop Oscytel of York in 956, one hundred and ten years before the Norman Conquest. By 1620 Owen Oglethorpe lived in Upton Hall, but he died in nearby Blidworth at a time when the plague hit Upton village. Martin Oglethorpe, probably related to Owen, is mentioned as Squire in about 1645, at the time of the Civil War. Later ownership of the land changed hands – by 1795 it was owned by Robert Smith, the later Lord Carrington. A small part of Oglethorpe’s Hall, which dates back to the time of Elizabeth I, still remains in the present structure.

The main structure of Upton Hall as you can see it today was erected by Thomas Wright in 1828. He was a member of a well-known Nottingham banking family and had been High Sheriff of Nottingham in 1811. Thomas employed W.H. Donthorne of London, later a founder member of the Royal Institute of British Architects, to design the Hall in a then fashionable neo-classical style, with a symmetrical south-facing elevation, an imposing Greek-style portico of fluted Ionic columns in the recessed central bays, and a large dome over the Main Hall. The new Hall was the focal point of the village of Upton.

According to the 1841 Census there were 10 servants living in the house with Thomas and his wife Francis, while other servants resided in the village. To celebrate Queen Victoria’s Coronation in 1838 a Union Jack given by Thomas was placed on the church tower and a procession of 150 children went through the village and around Upton Hall. The village men sat down for a feast of roast beef and plum pudding. The feast was followed by a dance. All revelers were “furnished with an abundance of furmety” (a dish made of wheat boiled in milk and flavoured with spices). Thomas died in 1845 at the age of 72, leaving the Hall to his son, the Reverend Joseph Banks Wright. He was married to Sophia. It remains uncertain what happened during this period. There is no record of Joseph living in the Hall in the 1851 Census. Kelly’s Directory of Nottinghamshire of 1855 named him as the owner, but this source is not noted for its accuracy.

In 1857 Philip Richard Falkner, a Newark solicitor, bought Upton Hall. He came from Southwell but had lived in Newark since 1825, where he set up a practice, also holding the Office of County Coroner for about 30 years, and served as Mayor of Newark in 1833. 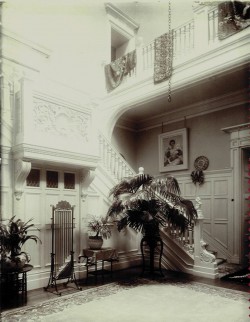 Philip lived in the Hall for nearly 30 years. He and his wife Alicia had six servants living in the Hall and others in the village. We know some of the names and birthplaces of these servants. Before Philip bought Upton Hall in 1851, Elizabeth Scholey had worked here as a cook. In that year Elizabeth, who was born in Lincolnshire, was 31 years of age. Then years later, Emma Shuttlebottom, aged 31 years and born in Leicestershire, was the cook, followed in 1871 by 25-year-old Betsy Johnson, born in Boston, Lincolnshire. In 1881 she was succeeded by Elizabeth Skerrit, 54, born in North Collingham. William Measures was for over 20 years a butler in Upton Hall, when it was owned by the Falkners. He lived as a tenant in one of the cottages on The Green in Upton, where his wife ran the village shop.

Philip Falkner married twice and had nine children. One of his daughters, Harriett Matilda, married Lucas Brodhurst, who lived at the Grange in Upton. Another daughter married the Vicar of Upton, William Peacocks. When Philip died in 1888, at the age of 86, his will stated that the Hall and land were to be sold and the proceeds to be placed into a trust fund for his children. On 8 August 1888 an auction was held at Edward Bailey & Sons of Kirkgate in Newark. It was well advertised:

The MANSION is a farm residence known as Upton Hall, well situated on an eminence having a picturesque view of the valley of Trent. It contains a lofty and spacious Entrance Hall with circular Picture Gallery, Dining Room, Sitting Room, Morning Room, Library, Housekeeper’s Hall, Large Kitchen, Scullery and extensive Cellars. 10 Bedrooms.

The Stables have 4 stalls, 2 Coach Houses with Hay Lofts above and surrounded by gardens. Grounds tastefully laid out, walled kitchen garden, Forcing Houses. The House is in substantial repair and the stabling, cow houses and other accommodation is of excellent quality. Good feeding land.

The ESTATE is well timbered and there is a good water supply.

However, only four of the 16 lots were sold. The main lot, Upton Hall and its immediate land and cottages, remained unsold. According to the Philip’s will, his daughter Mary Frances Falkner was allowed to stay on at the Hall, which she did until the early 1890s. Her means must have been limited as she had only three servants living in it (with perhaps more of her servants in the village). In 1894 or 1895 the Hall was sold and Mary moved to South Leigh House in Newark’s Market Street.

The new owner was John Warwick, a director of the Newark brewing firm of Warwick & Richardson in Northgate. He remodeled the interior and added the West Wing, containing a large ballroom with a stage and a games room. With its pleasure grounds, fountains, conservatory and gardens it must have been a very desirable residence. Many village functions were held here over the next 40 years. Upton Hall as you see it today is as John left it on his death in 1935. Sir Albert Ball bought Upton Hall in 1936 as an investment, but he never lived in it. He had been Mayor of Nottingham in 1909, a JP, and father of the World War I fighter pilot Albert Ball VC.

Although purchased by the order of the Fathers of the Holy Ghost in 1939, because of the onset of war, the Hall was requisitioned to provide a home for a school of partially-sighted children who had been evacuated from Sussex. In 1945 the Fathers of the Holy Ghost did actually take up residency and the St Joseph’s Roman Catholic Theological Church was established in the Hall.

Students, being trained by the Fathers for the priesthood, spent the final six years of an eight-year course here. There were on average 15 students, rising during one year to over 30. Many changes took place at the Hall to accommodate them: the Grimthorpe Room (Ballroom) was partitioned into three lecture rooms, the Library became the Chapel, the office off the Library was the Sacristary, the Bateman Room was the Dining Room, the room to the left of the front entrance of the Hall was the office of the Rector of the College and the cellars consisted of many oratories. The grounds were maintained by the students. On the second terrace of the front lawns there was a tennis court. Cows were kept in the Stable Block, with pigs and over 1500 hens in the paddock. The students grew vegetables and herbs in a kitchen garden, both inside and outside the garden wall.

The discipline of the Order was extremely strict. They rose early in the morning at 5am to start a rigorous daily programme of prayers, study and physical work. They were not allowed to leave the premises, enter the Main Hall area or walk up or down the staircase of the Main Hall unless they were carrying out maintenance or cleaning duties. On special occasions they were allowed a single cigarette. The British Horological Institute (BHI) bought Upton Hall from the Fathers of the Holy Ghost in 1972. The Hall is now a Grade 2* listed building with 72 rooms and grounds of 10 acres. It houses the timeless collection of the BHI Museum Trust, brought together by BHI members since 1858. The Hall is also home to the offices of the BHI headquarters, watch and clock workshops, accommodation for participants in short horology courses and exams, its archives and library.

Finally, two ghosts from this long history still appear occasionally in Upton Hall. The White Lady has been seen in the Library, walking through a doorway, which is now bricked up, and she sits down at different places in the room. This room was part the 1895 extension, created by John Warwick. When Upton Hall was a family home, this room must have been one of the principal bedrooms, but the doorway did not exist until the time of the Holy Ghost Fathers. The other ghost is a black figure which brushes past on the back staircase, always going downstairs. This stairway is in the 1828 part of the house, but back then the landing at the top of the staircase only led to the right, with a solid wall to the left, whereas nowadays it leads to the staff offices of the BHI.