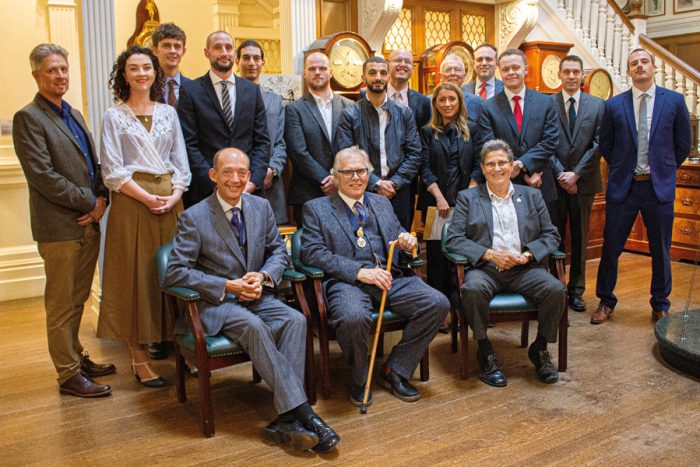 It’s that time of year again: the BHI Awards Day at Upton Hall on Saturday 26 October. It’s always exciting to see how students of our clock and watchmaking courses have done, and Awards Day is our chance to recognise their hard work, achievements and, of course, contribution to the wider world of craft.

Back in March, the Heritage Crafts Association released its annual Red List of Endangered Crafts. Since 2017 when the list first began, clockmaking has been classed as ‘endangered’ (meaning it has enough craftspeople to pass the skills to the next generation, but there are serious concerns about ongoing viability) and watchmaking as ‘critically endangered’ (at serious risk of no longer being practised in the UK). This year, for the first time, watch dial enamelling was also on the list, classed as ‘critically endangered’.

It’s sobering knowledge, but we can take heart. At the Awards Day, we’ll see our latest crop of clock and watchmaking course students to pass their exams, gaining diplomas and winning prizes for exceptional results. They are the people who will be taking horology into the future, keeping it viable and continuing a craft – and, indeed, an art – that deserves its place in human history until the end of, well, time.

Talking to the people who are collecting diplomas and prizes this weekend, one thing that stands out is their confidence in the future. They know that beautiful and intricate antique clocks and watches can carry on measuring time for hundreds of years with the right servicing and repairs. Ask them what the future of horology is and they see it; perhaps guided more by computer-aided design, or in which hand skills to make parts are even more important. Working clockmakers and watchmakers report having months’ worth of work on their shelves. I myself receive calls every week from people seeking someone to repair a cherished watch or clock; many of them travel to other cities if there isn’t a horologist in their own. Our short courses at Upton Hall regularly sell out. There may not be many horologists in the country, but that shouldn’t suggest there isn’t a demand for them; on the contrary, it makes people more determined to seek them out.

Awards Day is a chance for us to acknowledge our students, the huge effort they put into learning a precise, artistic and complex craft and the resulting rewards. It is also a chance for us to see that horology, while it may not always be prominent, is still necessary in our country, ticking away.