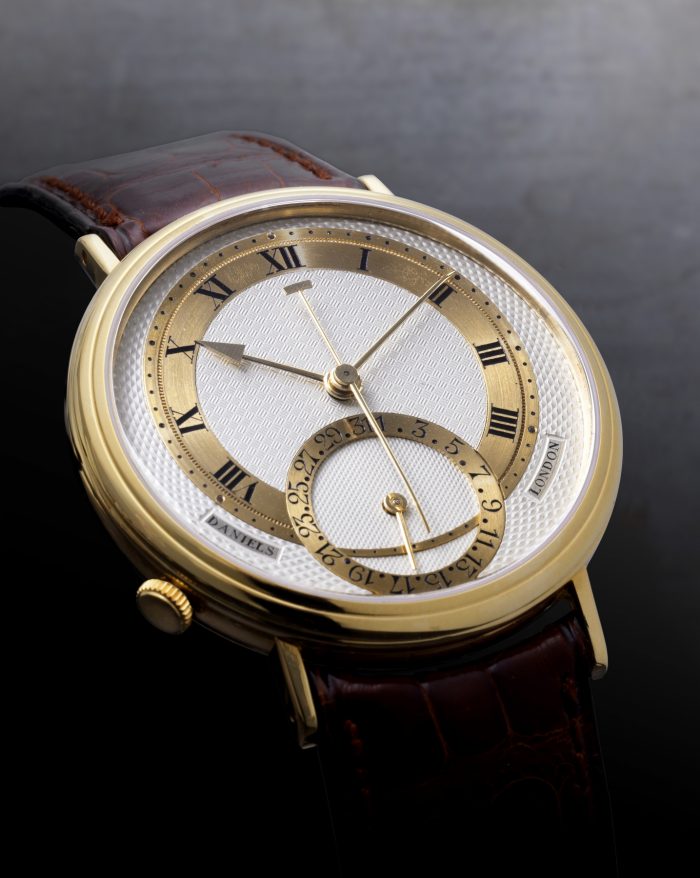 A new world auction record for a British-made wristwatch was set when a Millennium watch by Dr George Daniels CBE FBHI sold for £519,000 (including buyer’s premium).

The watch, from 1999, was made in a collaboration between George Daniels (1926–2011) and Roger W Smith, who produced a small number of ‘Millennium’ watches together to mark the year 2000.

Daniels’ timepieces have achieved increasingly strong interest at auction. In July 2019 at Sotheby’s ‘Masterworks of Time’ sale, his ‘Space Traveller I’ pocket watch from 1982 sold for £3,615,000 including premium.

Daniels was a Master of the Worshipful Company of Clockmakers and his work is recognised in the Clockmakers’ Museum (in the Science Museum in London). He was also a Craft Member, and later Fellow, of the BHI. In addition, he was President of the BHI from 1980 to 1981 and received its highest accolade, the Gold Award, in the latter year.

The Millennium series was the first collaboration between Daniels and Roger W. Smith and was created over three years. (Their final joint project was a series of 35 wristwatches to mark the 35th anniversary of Daniels’ invention of the co-axial escapement). In its cataloguing, Bonhams notes how it took Daniels over 20 years to persuade Swiss watch brands just how much of a horological advance the co-axial escapement was. He succeeded eventually, however. When Omega entered into a deal with him and included the co-axial escapement in select models at the Basel Fair in 1999, Daniels and Roger Smith, then his apprentice, set about creating the Millennium series in celebration.

Listed as lot 45 in the sale, the watch sold was the ninth in the limited series of 48 Millennium wristwatches produced in 18 carat yellow cold. There are seven more in 18 carat white gold.

It was described as ‘exceptional, fine and rare’, with an automatic movement, Daniels co-axial escapement, a glucydur balance and a gold engine turned rotor. Additionally, there is an engraved surround to the movement as fitted into the case back with foliage decoration. The dial is ‘engine turned’ with two cartouches (scroll inscriptions), signed Daniels and London. There is an eccentric gold chapter ring with black roman numerals, black outer minute markers and a gold subsidiary dial at 6 for calendar markers. The case has a snap on exhibition back. The watch case diameter is 37mm.

The watch was accompanied by a provenance letter dated 28 February 2014 and correspondence from George Daniels dated 1999 and 2007.

Today Roger Smith is one Britain’s foremost independent watchmakers. Click here for more information about a watch made by Smith that was recently auctioned in Geneva.