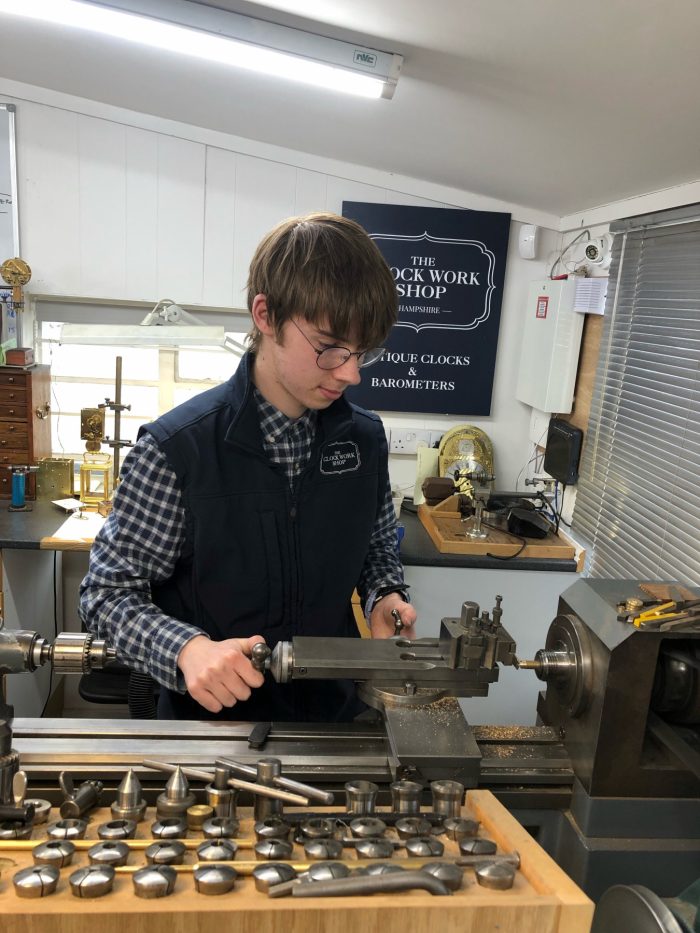 When a child’s first words are ‘tick tock’, it’s a sign of a budding horologist – and that’s certainly been the case for 17-year-old Lewis Walduck, one of the BHI’s newest, and youngest, members and Distance Learning Course students.

Based in Oxfordshire, Lewis is taking an apprenticeship with the Clock Work Shop in Winchester (the firm, which also has a Dorset branch, is hiring) but has been a horologist in the making for most of his young life already.

‘I’ve always been interested in clocks,’ he said. ‘My grandparents didn’t have many clocks, but they did have a couple of spring-driven ones and I was fascinated. They gave me an old pocket watch when I was about seven or eight and I opened up the back and that was it. I was so interested in the mechanics and it was all I wanted to do. I did overwind and break the watch when I got it. I just kept tinkering with it and broke the spring.’

He is also interested in technical drawing and antiques buying and selling, but horology is his passion.

‘After I did my GCSEs, I left school as soon as I could to study horology and take my apprenticeship,’ Lewis said.

‘It was in the pipeline for two years beforehand. I always came to Dorset for holidays and I met Simon Allen, owner of the Clock Work Shop. He said I could spend a day in the workshop and then offered me an apprenticeship. It is such a great place to learn. They do everything properly.’

Lewis was thrilled, but there was just one problem: how to do the 70-mile commute every day. A train would have been four hours each way and £60 a day. Luckily, he was able to pass his driving test between lockdowns.

‘My focus is on clocks, as we do at Clock Work Shop,’ he said. ‘I prefer clocks. They’re rarer. I love their history and the idea that they can be 300 hundred years old and still functional and fixable, and made not only to work but also to be beautiful. I don’t think I have the patience for watches, they can be so complicated, but I do like the older ones with all the engraving.

‘I’ve gained hand and tool skills at Clock Work Shop, but before that, nobody ever showed me anything. I did have a little workshop in my room and my dad converted a built-in wardrobe into a little bench, but that’s all. Until I started at the workshop, and now the BHI, I was entirely self-taught through books and internet videos.

‘I have friends who are still at school and don’t know what they want to do. I’m lucky that I’ve always known I wanted to do this.’