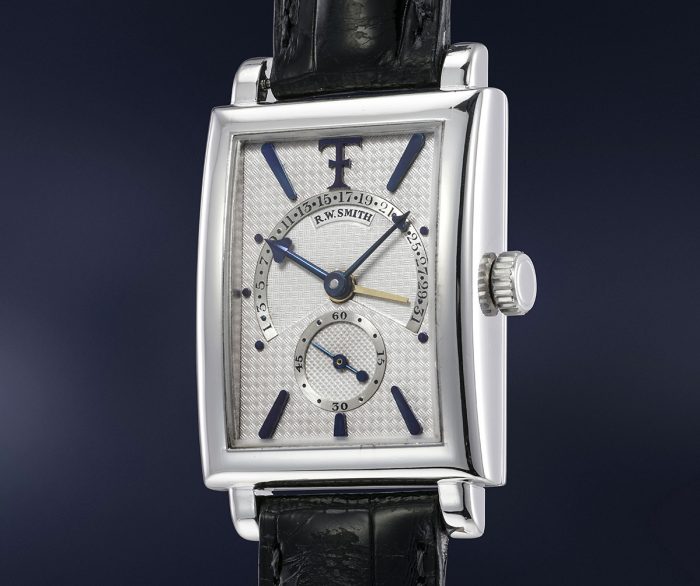 A wristwatch made by one of Britain’s foremost contemporary independent watchmakers Roger W Smith OBE FBHI, has sold at auction for Swiss CHF 541,800 (approximately £423,916) including buyer’s premium.

The wristwatch, a Series 1 ‘Onely Theo Fennell’, with a rectangular 18 carat gold white case, retrograde date, and a manual wind, from circa 2005, was described by the auction house as ‘incredibly rare’. The auction estimate for the watch was between CHF 40,000 to 80,000. The final price achieved created a new world record for any Roger W Smith wristwatch sold at auction to date.

Auctioned by Phillips in Association with Bacs & Russo as Lot 145 in the Geneva Watch Auction: XIII, which was held between 8 – 9 May 2021. The watch was in good company as the auction house sold all 233 watches it put up for auction over the weekend.

Leading auctioneer and watch specialist Aurel Bacs, Senior Consultant, with Phillips in Association with Bacs & Russo, paid full tribute to Roger Smith’s watchmaking as he conducted the auction and sold the watch. Interestingly, the auction house stated that for the whole weekend sale it had a record attendance of more than 2500 online bidders from 83 different countries.

The auction house further noted about the watch that ‘of the nine rectangular Series 1s that were made, three of them were part of the ‘ONELY’ series commissioned by celebrated London jeweller Theo Fennell. The Fennell logo is placed at 12 and had his name engraved on the main plate. The present watch is the only Series 1 in white gold made, making it truly unique.’ The watch’s length is  35.5mm excluding lugs and the width is 38.5mm.

Dr Roger W Smith OBE,FBHI served his watchmaking apprenticeship with the late renowned horologist George Daniels, based in the Isle of Man. In 2001 Smith set up his own workshop, Roger W. Smith Ltd, on the Island. Increasingly recognised for his work in 2018, Smith was awarded the Order of the British Empire (OBE), and an honorary Doctorate from Birmingham City University. In 2020 the Isle of Man Post Office released a commemorative book of stamps to recognise the Island’s horological history titled, Master Watchmakers of the Isle of Man. Smith is included in the stamp collection which also features John Harwood and George Daniels. On his website, Roger W Smith notes that his workshop makes just 12 watches each year.

Image courtesy and copyright of Phillips.