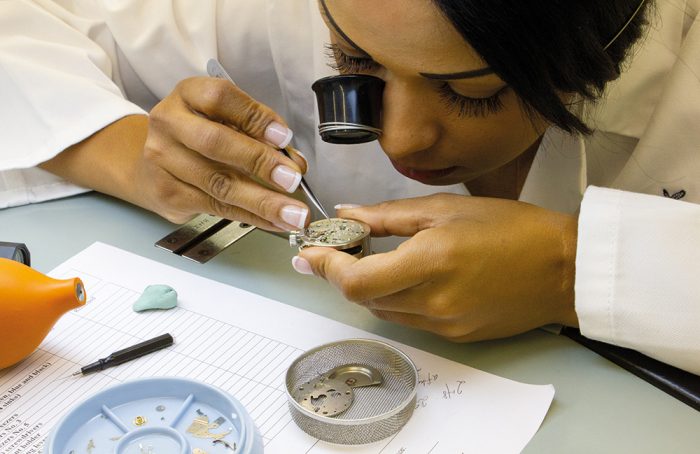 Did you check the time at all today? Yes, thought so. Look at the date as well and you might also see that it’s National Careers Week. So let’s talk about clockmaking and watchmaking as professions.

We run our lives by time, so it’s strange that horology isn’t higher on the career option radar. Mobile phones, of course, have a lot to answer for. But the watch industry is thriving – for many people, they are works of art and self-expression, not just timepieces – and clocks need service and restoration.

Is the work out there? Well, the recruitment adverts in the current issue of the Horological Journal includes ones from the British Museum, Tag Heuer and Richemont. There are still more jobs available too, if you look at Current Vacancies on our website. I can also vouch for the number of phone calls we receive at Upton Hall from people looking for someone to repair a treasured watch or clock. Ross Alcock MBHI of J A Alcock & Son reports earning a ‘comfortable living doing something I enjoy’, noting: ‘There might not be a lot of horologists, but there’s plenty of work out there. We need new people and young blood to join, and let people know how satisfying, enjoyable and diverse a career in horology is.’

Ross, as it happens, chairs a working group dedicated to developing an apprenticeship in clockmaking which has just secured approval for Government funding. A watchmaking apprenticeship is also in development. Ross’s own apprentice Bryn Millichamp describes himself as ‘just fascinated with how clocks work.’

Paddy Woodward, a watchmaking apprentice with Geoff Allnutt at J E Allnutt & Son Ltd, is also passionate about horology. ‘The subject is so big,’ he explains. ‘You go deeper and deeper and it just gets more and more interesting as you learn about various escapements and history. You need a technical mind and to be very creative and curious.’ Paddy is considering eventually going into antique restoration. ‘When you’re qualified, you definitely find work,’ he adds. Geoff, who also runs Geoff Allnutt Clocks, confirms: ‘There’s a ton of work in restoration. We need skilled people who can do it. With the internet, you might get someone in Holland contacting you to say they’ve heard you can produce the parts they need. You have to really like this job to do it, but I do; after 30 years at the bench, I still see things I’ve never seen before.’

Watchmakers often work in service and repair for watch houses and their outlets, though many of them run their own repair businesses and may even start their own watchmaking companies eventually. Clockmakers frequently work for themselves or run their own businesses around servicing, repairing and restoring clocks belonging to individuals or museums. Paul Roberson FBHI, Chairman of the British Watch and Clockmakers’ Guild and BHI tutor, had perhaps the ultimate job in horology before he retired: Clockmaker to the Palace of Westminster, caring for all the clocks in the Houses of Parliament including Big Ben. ‘It’s amazing to think that I started as an apprentice in a basement and went on to look after Big Ben,’ he muses. ‘If you had told me at technical college that I would have such a privilege and honour, I would never have believed it.’

So how could you get started? Well, if you’re completely new to horology, you could come on one of the BHI’s Taster Days (for clocks or watches). We also run various short courses on different horological skills. If you’re looking to become a professional, you can take our Distance Learning Courses, study remotely at your own pace and then take the exams to gain the official qualification (though you can just do the course for fun if you’re an enthusiast). Don’t let anything like age put you off, either; many of our students move into horology as a second career, or even in retirement.

Time is the trade for horologists. If you want a hands-on career that marries art, science, history and mechanics, the time to look into clock and watchmaking is now.

By the Light of the Moon: A Lunar Calendar on the Antikythera Mechanism

We use cookies to give you the best possible experience on our website. By continuing to browse this site, you give consent for cookies to be used. Find out more.