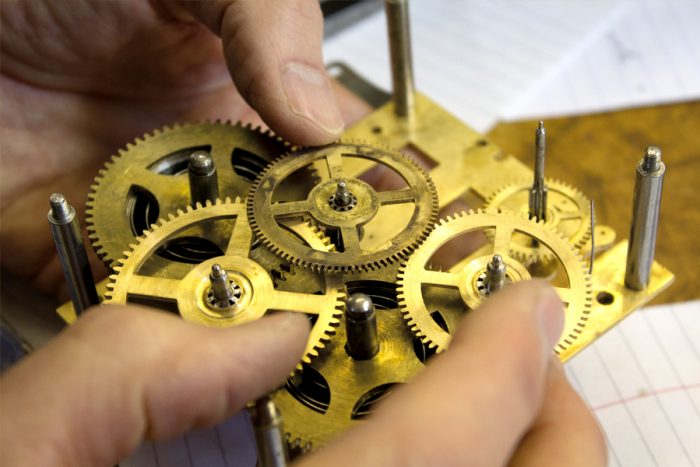 World Dyslexia Awareness Day (ahead of Dyslexia Awareness Week, which starts on Monday) is the perfect time to talk about horology. Really, it is. One of the first things I noticed when I became Editor of the Horological Journal in 2018 was how many horologists appeared to have dyslexia. (And, of course, how many of them also had the same experiences of having been so very wrongly written off as intellectually lacking as a result, in school and elsewhere.) I’ve been wondering since then if there could be a connection and, well, it seems likely.

Authors of a paper published in 2018 point to research that revealed that ‘dyslexic students were consistently more accurate in processing multi-perspective 3D information’, noting that ‘dyslexic adolescents excelled in virtual reality tasks when asked to reconstruct a 3D house from memory’.* The tendency of dyslexic people for greater aptitude with tasks involving 3D and visual-spatial processing is well documented, in this paper and numerous others, and also for problem solving. According to the paper, ‘individuals with dyslexia prove talented in adopting an interdisciplinary approach as opposed to taking a more reductive approach.’ Furthermore, it cites other studies which indicate that dyslexic people ‘produced more alternative possibilities in a picture production activity’. I am reminded of all the ingenuity that goes along with an innovative clock or watch design that still keeps accurate time. ‘Multidimensional thought and perception’ and ‘pictorial thinking’ are among ‘eight gifts’ of dyslexia that were identified by Ronald D. Davis and Eldon M. Braun in their 1987 book The Gift of Dyslexia: Why Some of the Brightest People Can’t Read and How They Can Learn.

Helen Boden, CEO of the British Dyslexia Association, was not aware of the likely link between dyslexia and horology until I spoke to her, but she was not surprised by it.

‘From childhood to adulthood, dyslexic people tend to understand things in a deeper way, taking things apart and reforming and reshaping them,’ she told me.

‘Converting symbols to sounds is about reading, converting sounds to symbols is spelling. Neuroscientific research, using comparison groups, has shown that different parts of the brain light up when carrying out these activities. For non-dyslexic people, it’s a straight line processing, but in dyslexic people, it makes very different and novel connections.’ Indeed, many accountants are dyslexic too. This surprised me initially, until Helen explained that, while dyslexic people might struggle with word problems or memorising times tables, it’s often a different story with pure maths. ‘In financial roles, you are often thinking creatively to solve problems: how to maximise income, reduce tax and so on,’ she explained. ‘It becomes a different type of activity.’ One very suited to the common ‘problem solving’ aptitude, I imagine, and perhaps connected to the mathematical element of horology.

Dyslexia is far better understood now, but the need for awareness days and weeks indicate that there is still some way to go. Help, though, is available for those who need it.

‘If you think you might be dyslexic, the only way to know for sure is to have the assessment,’ Helen said.

‘Dyslexia is covered by the Equality Act, so there is a legal framework of protection.’

*Chathurika Kannangara, Jerome Carson, Sowmya Puttaraju and Rosie Allen, ‘Not All Those Who Wander Are Lost: Examining the Character Strengths of Dyslexia’, Global Journal of Intellectual & Developmental Disabilities, vol. 4 (July 2018).